LIGASANO® white can be used for all types of wounds and wound stages. Preoperative wound conditioning with LIGASANO® white is also a typical indication. LIGASANO® is sterile and non-sterile available.

With LIGASANO® green and LIGASANO® orange wounds can be covered or filled. A collapse of wounds under the influence of external pressure or suction, e.g. in active wound drainage or NPWT, is counteracted.

Wound conditioning prior to surgery

How does LIGASANO® white work?

Due to its rapidly falling pressure tension, LIGASANO® adapts to contours with low compression, resulting in a uniform and overall reduced pressure on the wound and body. Reducing the pressure on the wound surface also promotes collagen attachment and granulation. The contact pressure of the body of bedridden inactive patients is distributed very evenly by LIGASANO® white. The formation of ischemic decubital ulcers is effectively prevented.

The mechanical stimulus (i.e., the structure of the dressing is perceived by the tissue) promotes blood circulation and activates self-cleaning.

Further information about the mechanical stimulus

LIGASANO® white triggers a local blood circulation in wound and skin contact, which results in a better nutrient and oxygen supply in the wound area (activation of the wound) and, in addition, has a preventive effect on intact skin. Especially in inactive patients, the reduced, normal body functions are promoted locally. The mechanical stimulus lasts for up to three days, at the latest then LIGASANO® white must be replaced. Even without deliberate movements, the surface structure of LIGASANO® white exerts a mechanical appeal. In case of skin or wound contact the blood circulation is promoted, with all positive consequences. By activating the self-cleaning it comes to increased secretion (more wound exudate = antiseptic effect), plaque and germs are flushed out and absorbed (autolytic wound cleaning with the simplest means and without chemistry.) The success is an automatic wound cleaning or wound conditioning, which supports manually if necessary micro and macro movements of the patient lead to intermittent negative pressure and thereby promote the mechanical stimulus on wound and skin.

Since only excess exudate is absorbed (controlled suction, exudate management), LIGASANO® white does not dry out the wound. Depending on the thickness of the material creates an intermittent negative pressure. 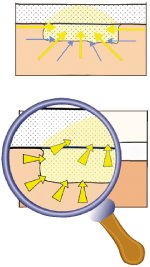 Further information on the exudate management

Any existing excess of exudate in the wound is absorbed without causing dehydration. The result is a moist, warm wound environment, germs are reduced and the wound is cleansed. LIGASANO® does not stick to the wound and works against maceration of the surrounding skin. The PU foam dressing has a high suction volume without changing the dimension and without hardening. Due to its honeycomb-like structure, LIGASANO® white has a considerable suction effect without drying out. Excessive wound exudate and body moisture are absorbed, maceration of the wound and intact skin is prevented. The risk of germ colonization is reduced.

Application for different types of wounds

How is LIGASANO® used in wound treatment?

Always cut LIGASANO® white slightly larger than the diameter of the wound. Then put it in the wound to make reliable contact anywhere. Because only where LIGASANO® white has contact it can work.

The risk of developing wounds due to insufficient blood flow can be counteracted with LIGASANO® white.

Wound healing disorders due to lack of blood flow can be reduced or eliminated, contaminated or locally infected wounds are usually cleaned without further action. Granulation and epithelization are thereby promoted, the desired results usually occur quickly and clearly. LIGASANO® white is not an implant, so it should not remain permanently in wounds. After at least three days of wound contact, the wound dressing or wound filler must be replaced.

Please keep in mind that adequate nutrition is crucial for successful wound healing. In chronic wounds, there is an increased need for energy, protein, zinc, vitamins and fluids, which must be covered.

The treatment of LIGASANO® white must be at least 2 cm thick even with flat wounds, measured from the wound bed. For all other wounds, the dressing thickness must be thicker.

Rule of thumb: The larger the area of ​​the wound environment treatment, the better the effect.

The fixation must always be air-open. Fixing pants, bandages or preferably LIGAMED®Fix are very suitable.

Once a day to once every three days, but at the latest when the outside of LIGASANO® white the first secretion point becomes visible. This can be several times a day for heavily exsudating wounds in the cleaning phase.

Fixation of LIGASANO® on skin and wound Does not last very well and can exert small-area pull on the skin. Even "skin-friendly" patches strain the skin when peeling off. Disadvantage: Brakes over textiles; if the patient slips around, the fixation and LIGASANO® can also slip 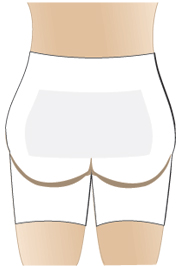 Low compression and permeable to air. Can be cut as required, replacing any fixation panties and any tubing.

Advantage: LIGAMED®Fix glides well over textiles, but brakes against LIGASANO®. Even if the patient slips in bed, LIGASANO® stays in place.

LIGASANO® green and LIGASANO® orange are elastic, foamed polyurethanes (PUR) that are almost permeable to air and water, conceivable like a three-dimensional sieve. The structure is rough, the surface coarse.

LIGASANO® green and LIGASANO® orange are used in wound care and treatment when a strong, elastic material with high air and fluid permeability is beneficial.

The surface of LIGASANO® green and LIGASANO® orange is relatively rough. When used in wounds or on the skin injuries can occur, especially under friction.

Basics to the application 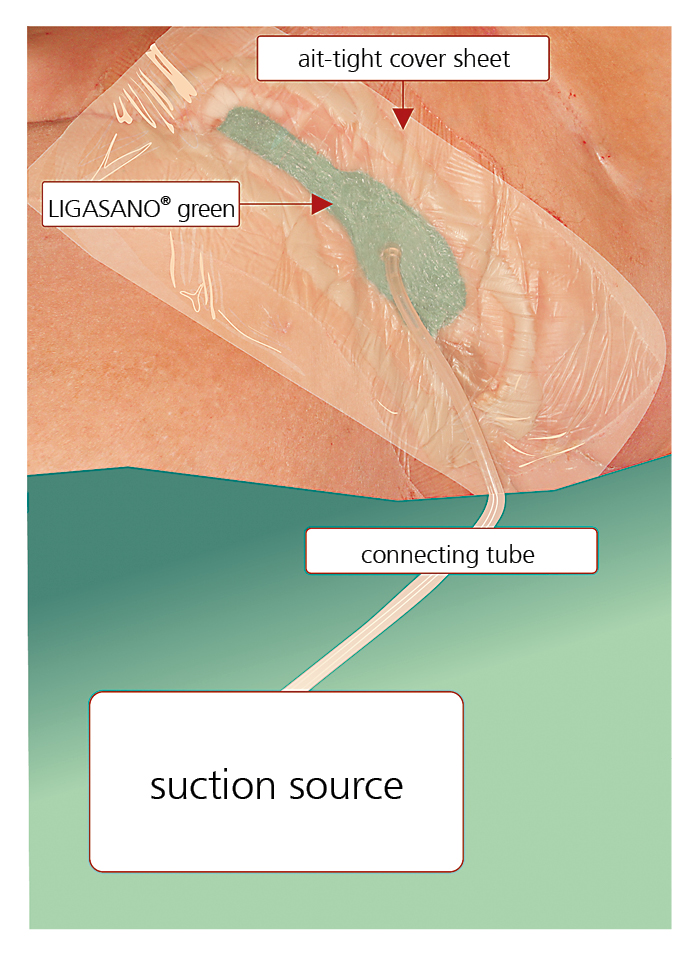 ►With LIGASANO® green and LIGASANO® orange wounds can be covered or filled. A collapse of wounds under the influence of external pressure or suction, e.g. in active wound drainage or NPWT, is counteracted.

►Due to the surface texture, a mechanical stimulus is exerted on the contact surfaces, which has a locally stimulating effect on blood circulation, thus promoting the normal body reaction "wound cleaning by secreting" in contaminated or infected wounds. Likewise, this should promote the transport of substances in the wound area and thus promote granulation. This active principle has been known and proven by LIGASANO® for decades.

►LIGASANO® green and LIGASANO® orange can also be applied on the skin, especially in the wound environment. Thus, the mechanical stimulus described above can be used over a large area to promote wound healing.

►Due to the described open structure wound irrigation is possible despite the filled wound.

►A drain of exudate, irrigation, etc., which allows gravity downwards from the wound.

►LIGASANO® green and LIGASANO® orange can often be meaningfully combined with LIGASANO® white when used.

►A combination can be found, for example, in when significant amounts of exudate need to be controlled, which exceed the capacity of LIGASANO® white.

Click here for more information on LIGASANO® green and orange